We Love The Babies
To the moon and back 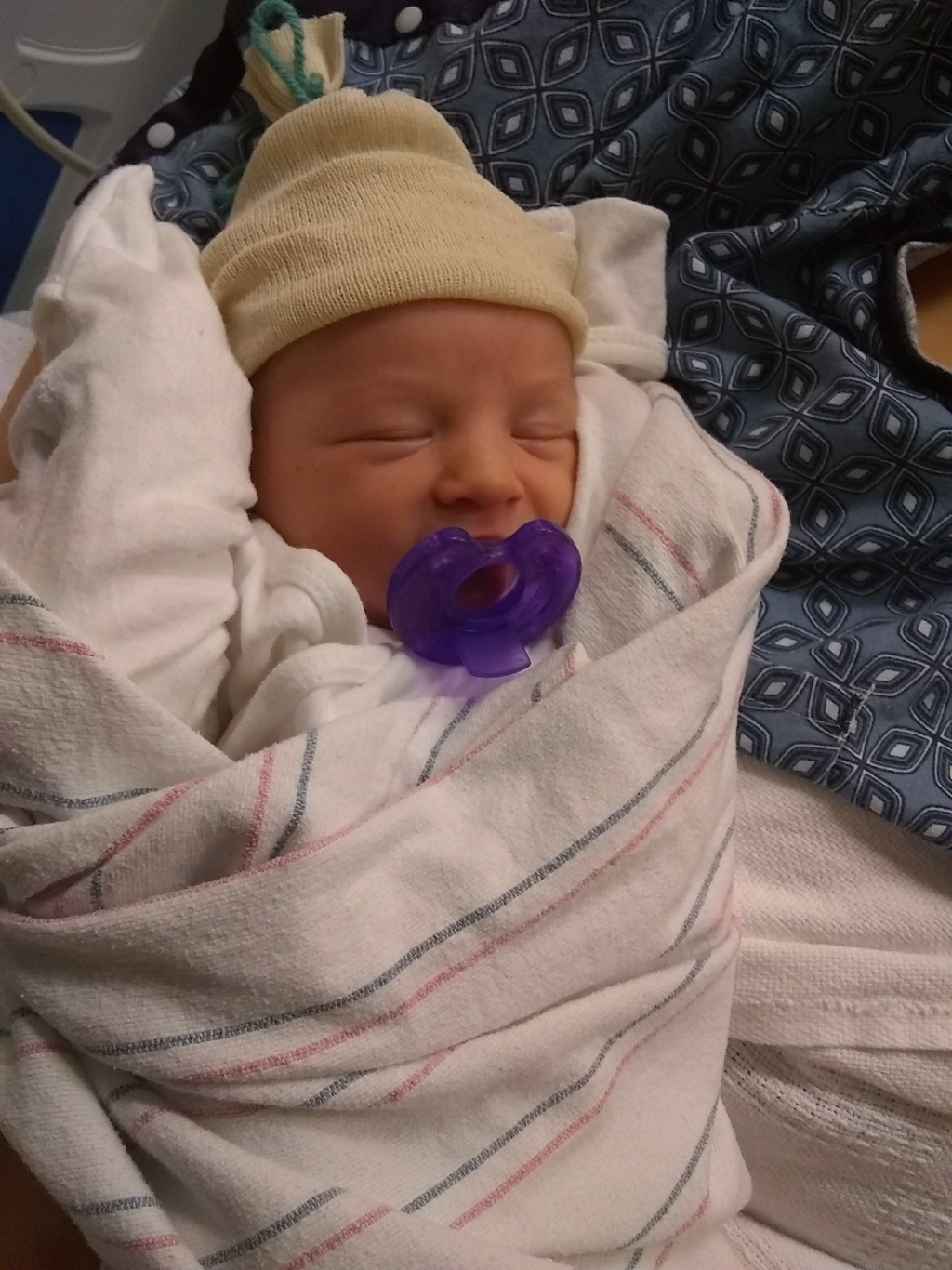 Baby Boy Christos enters the world, and just by being born, he makes it a better place. 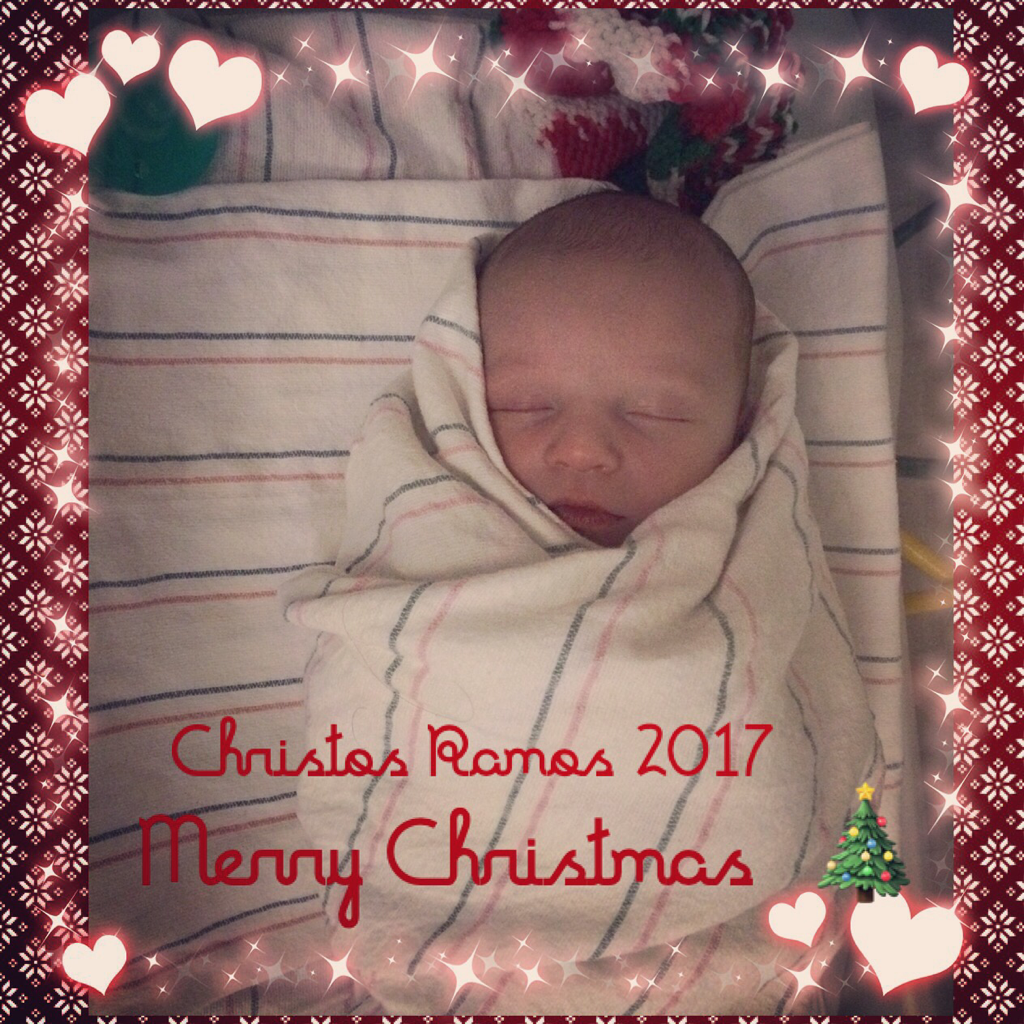 5 Days Old: His interests include being swaddled, classical music, kangaroo care, and being held by mommy and daddy. 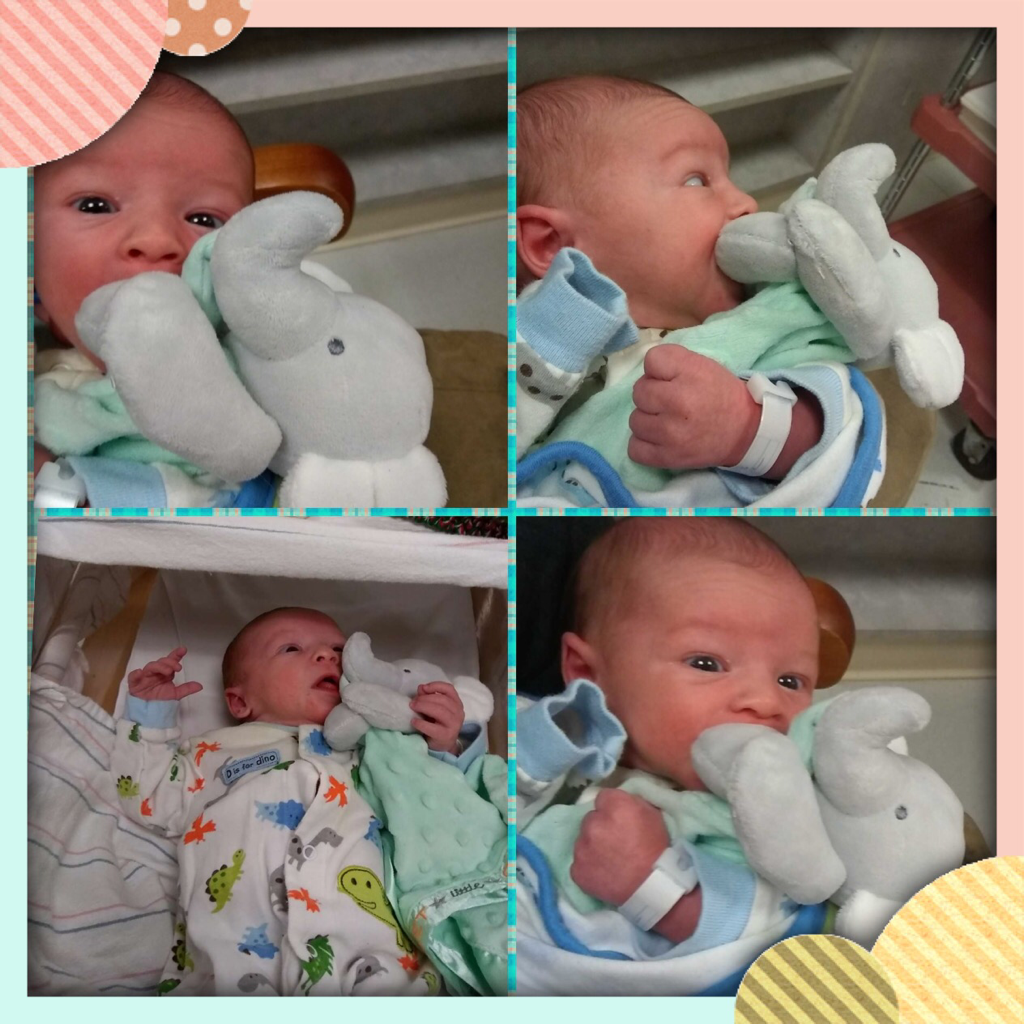 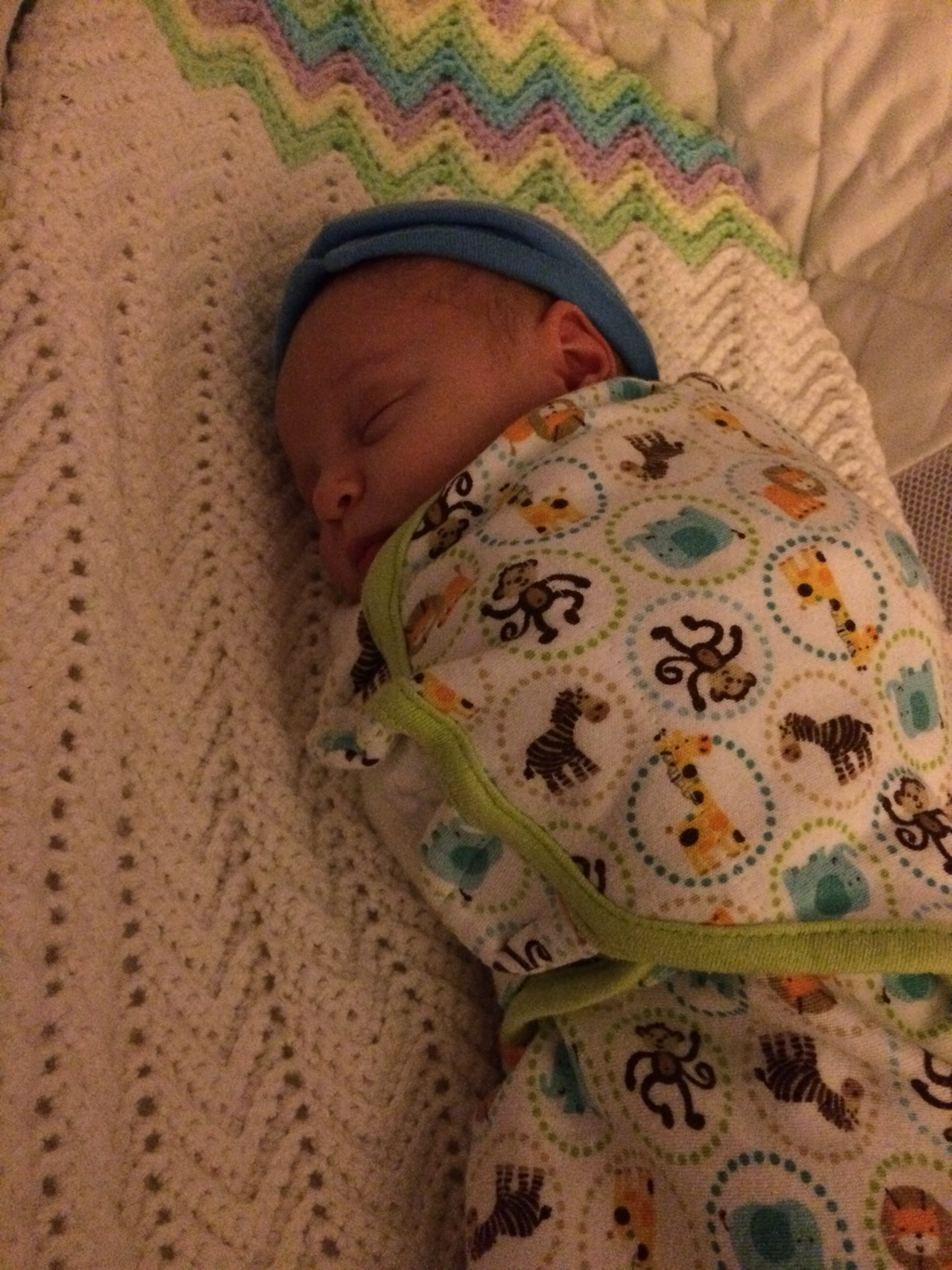 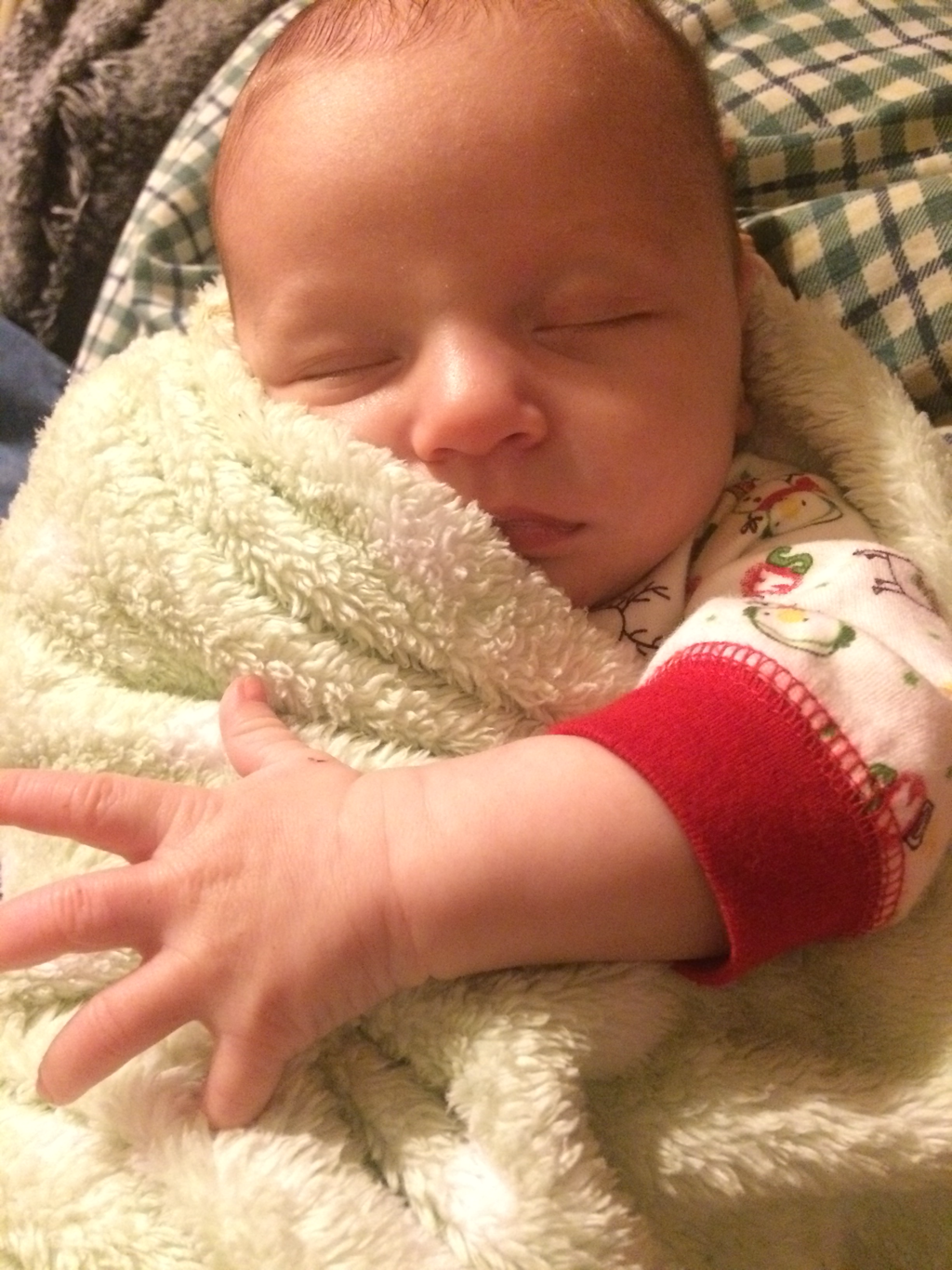 Gaining weight steadily. Weighs 8.8 pounds. Gained 1.1 pounds in 14 days. Christos is responding well to the Soy formula instead of milk based formula, and is prescribed Zantac for Acid Reflux. Since the Formula change he started gaining weight faster. He is eating more at a time now. 4-7 ounces every 3-4 hours. 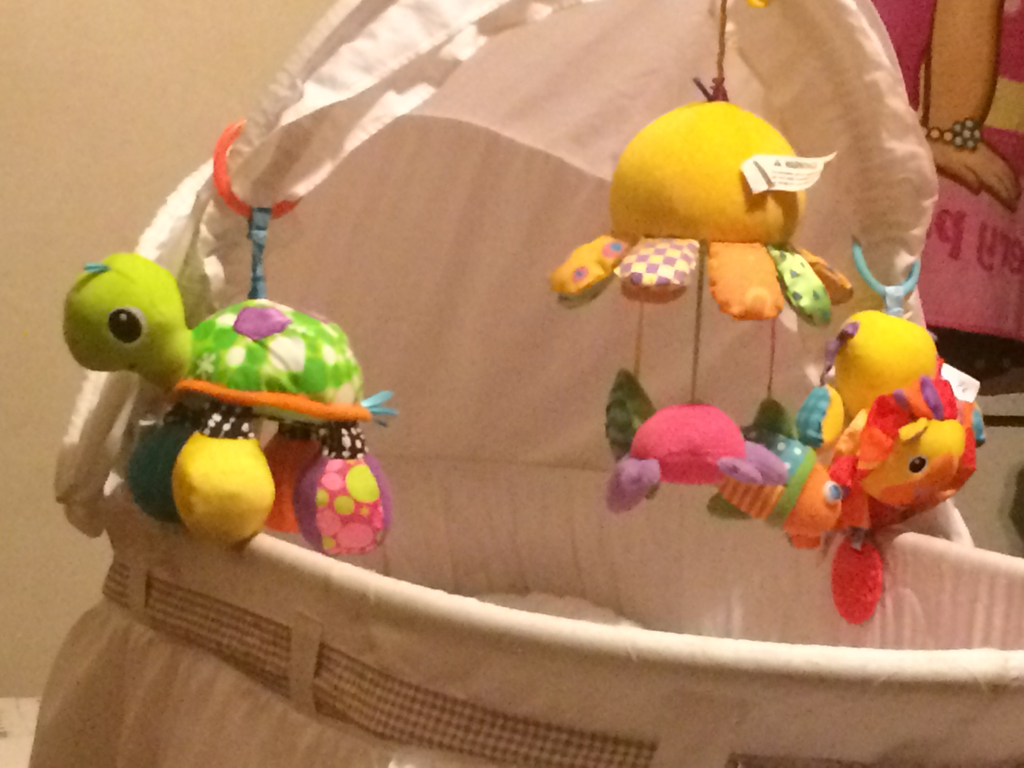 Christos bats and swats at his hanging toys. He first noticed them at 3.5 weeks old and now at 1 month bats each one back and forth. He tries hard to bat at them and gets very excited. Every morning we play for a few minutes together with the hanging toys in his bassinet. One of us will twist the toy so it spins and he will watch it and then swat at it.
Before Christos’s first month was over he was smiling, giggling and cooing. He is one happy baby.

​He doesn’t like to get his nails clipped even though he likes to hold our fingers while we feed him. His nails grow fast and are healthy so I’m sure he will get more comfortable with the idea. 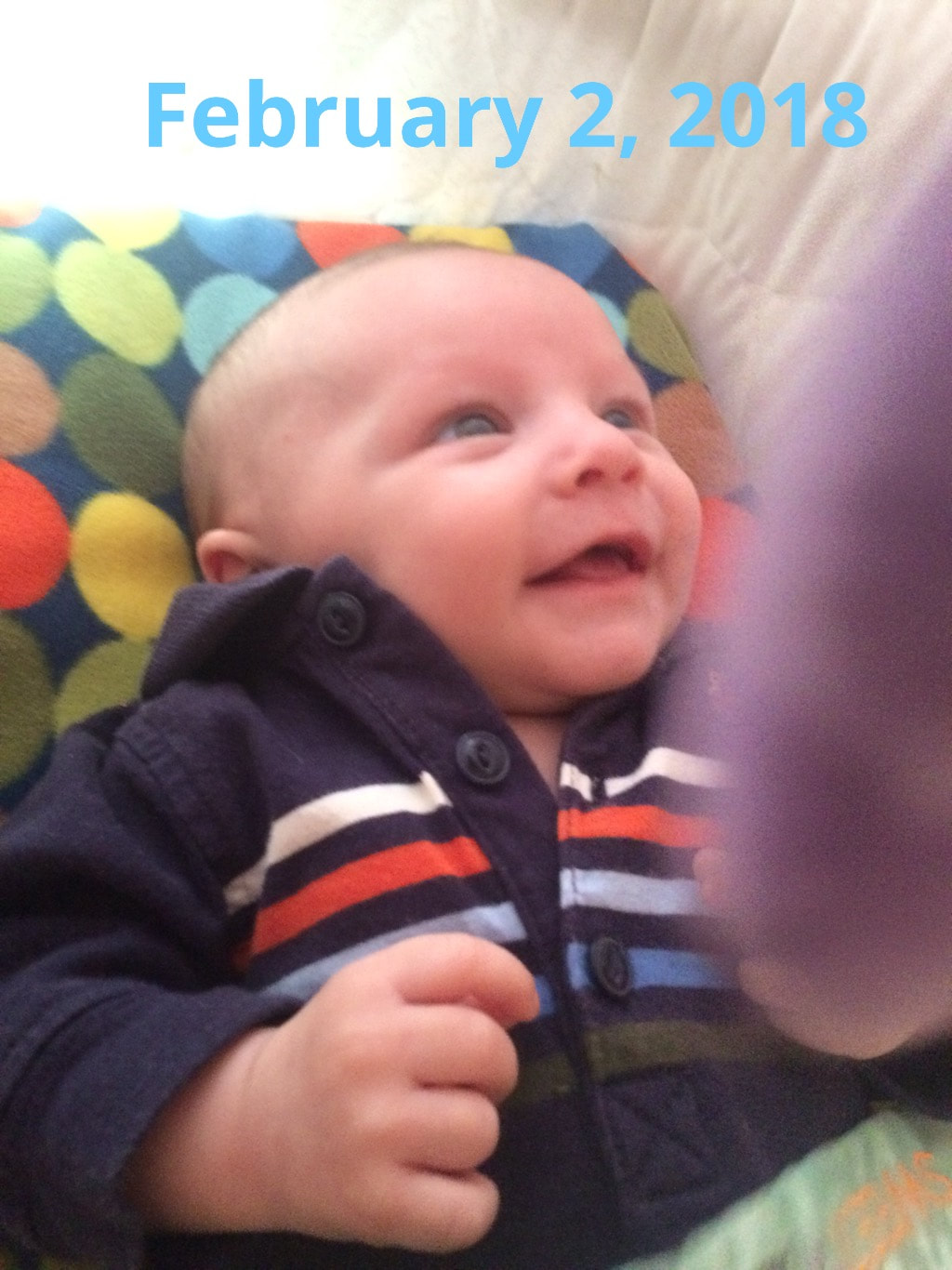 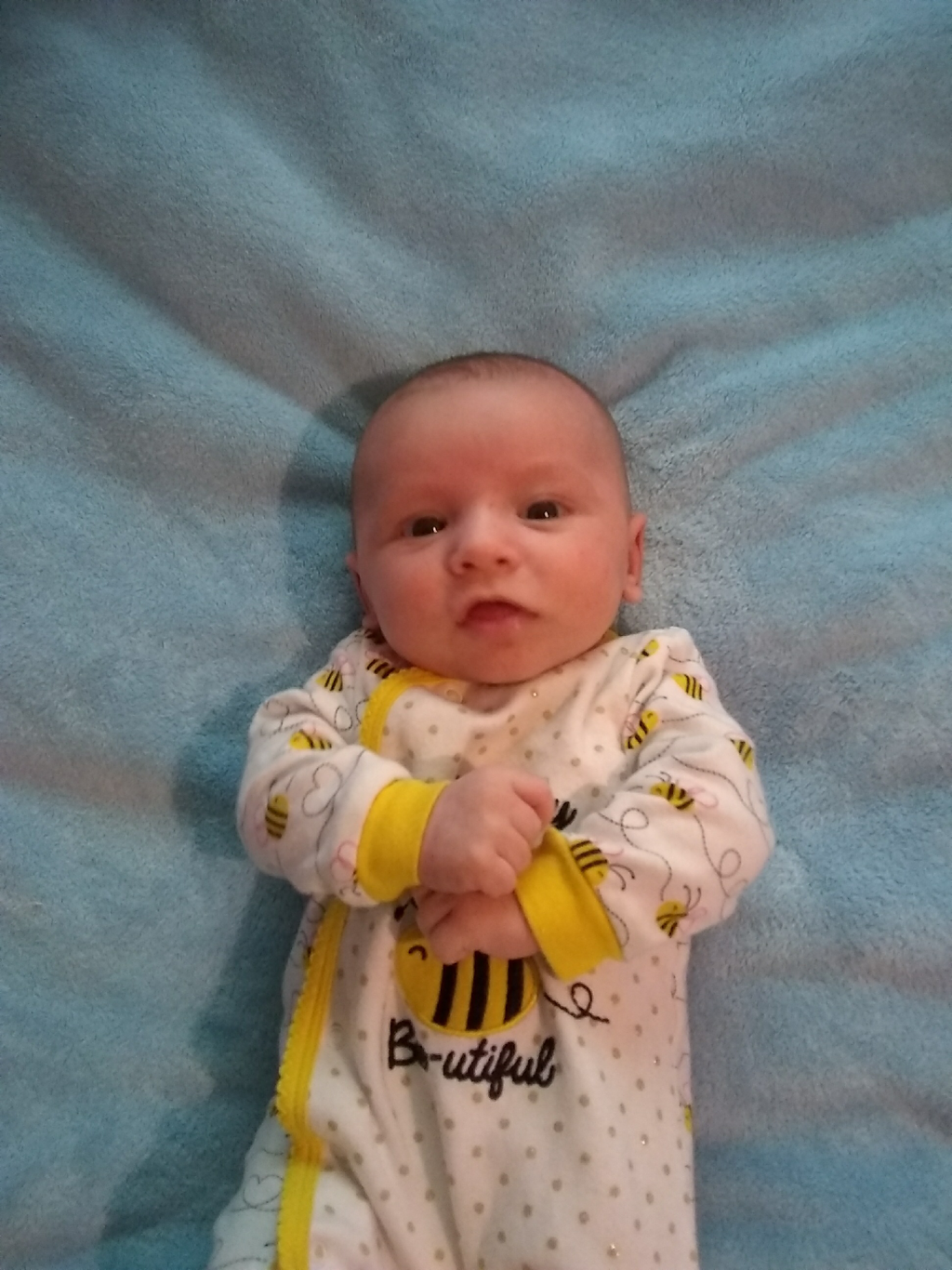 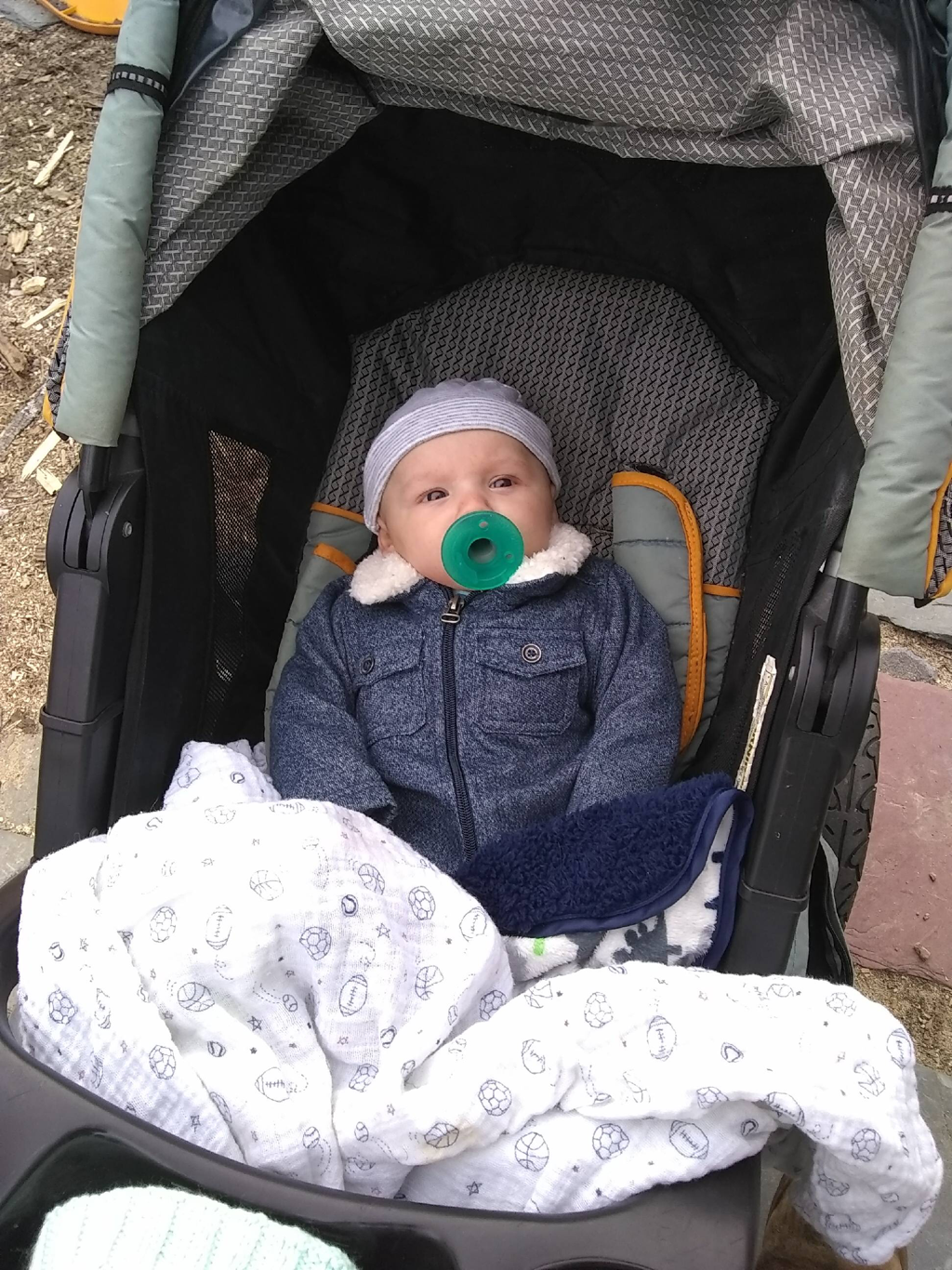 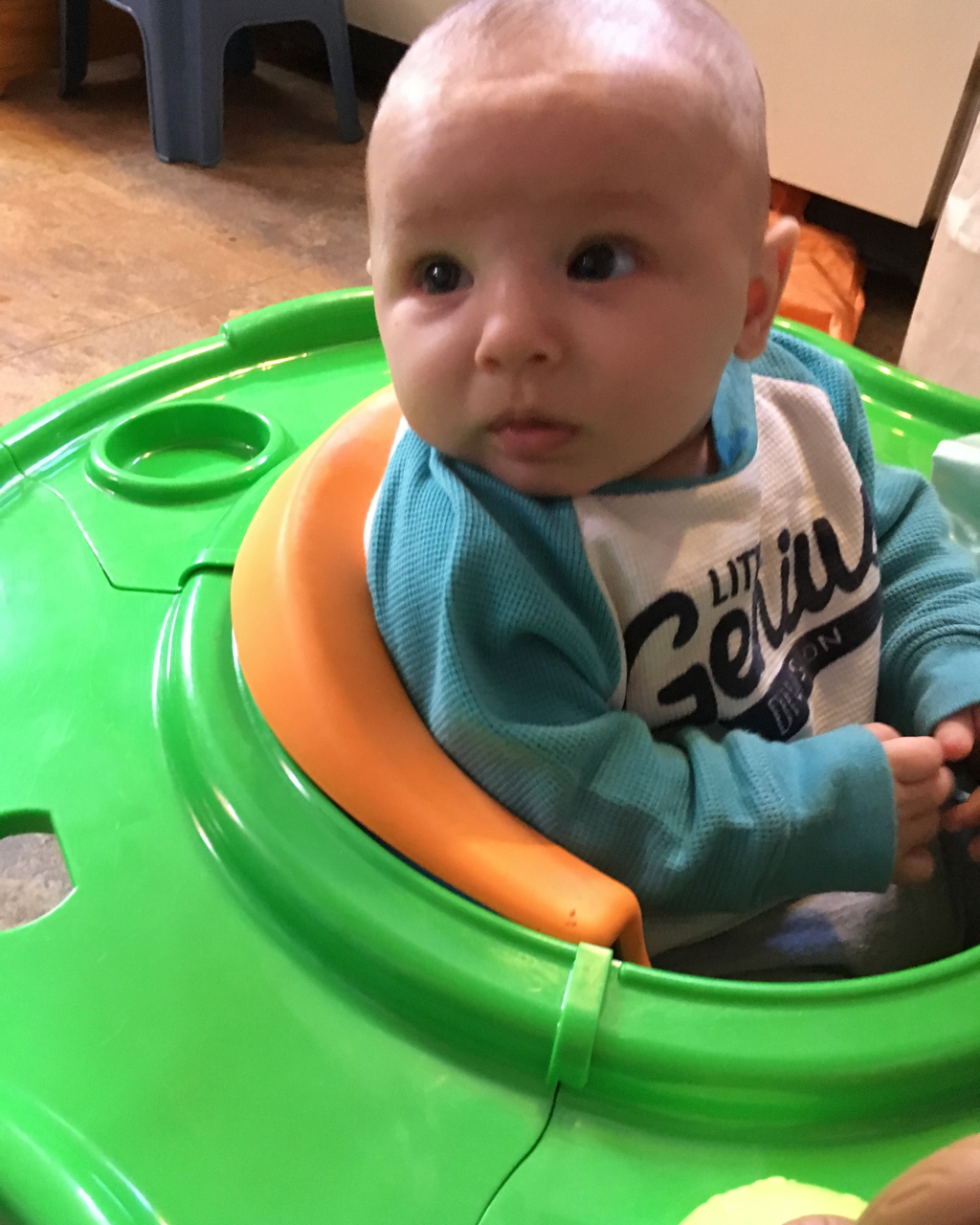 At 12 weeks old Christos is able to sit up in a bumbo seat and a chair like it. He enjoys playing with his toys and watching me cook. He was 13 pounds and 6 ounces at his last wic appointment. They suggested starting him on cereal. I thought it was strange for him only being 3 months, but it’s probably because of how big he’s gotten. Still his 4th month is coming soon and we shall see about Cereal then after I talk to his Doctor first. 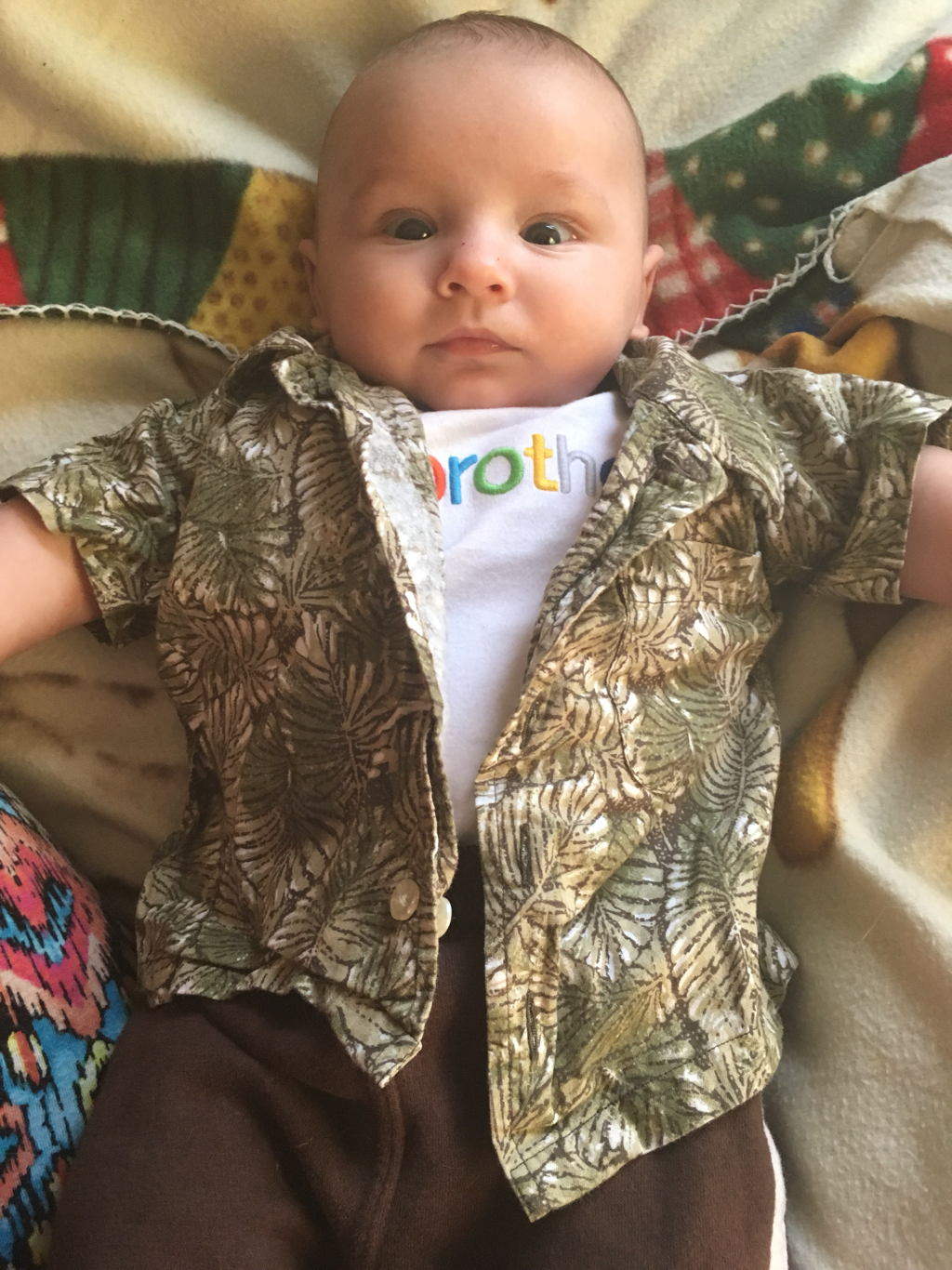 He’s already been making all sorts of cooing sounds. For the last few days (age 12 weeks and 5 days) he has been making clucking noises back at us. He’s starting to mimic the sounds we make back to us. 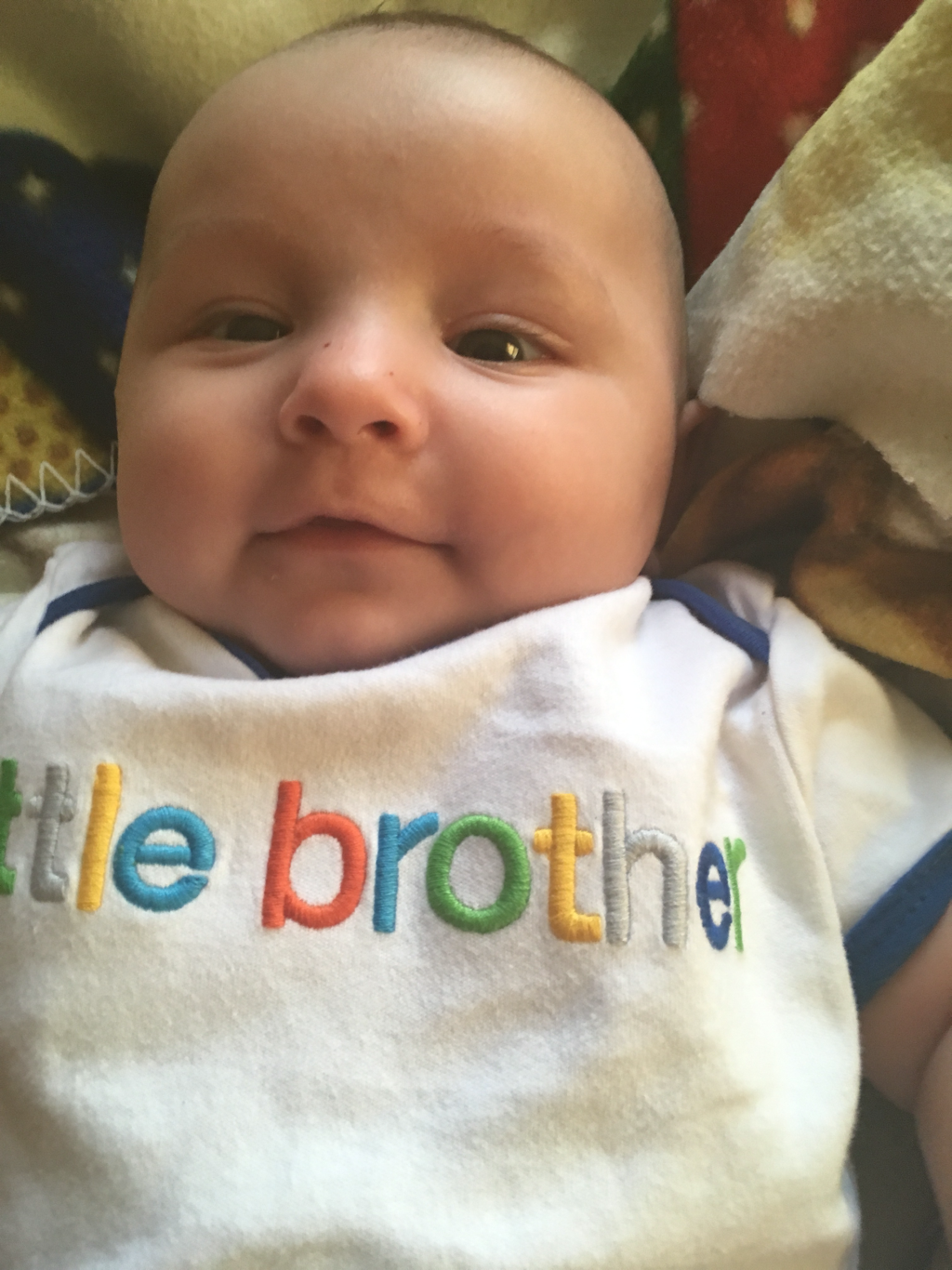 Christos doesn’t cry a lot unless he is hungry and/or needs to be changed. Even then he settles as soon as I pick him up. Which is the best feeling in the world, to know that I can soothe him instantly. He’s bonded with his Daddy and with his Mommy and I am very thankful for him.

His favorite toys are his Yellow Sun that dangles And has a star, crab, and fish that jingle when he swats at it. He loves tummy time and playing on the floor in his play gym. He also has a favorite turtle too. He can roll over from his belly to back. 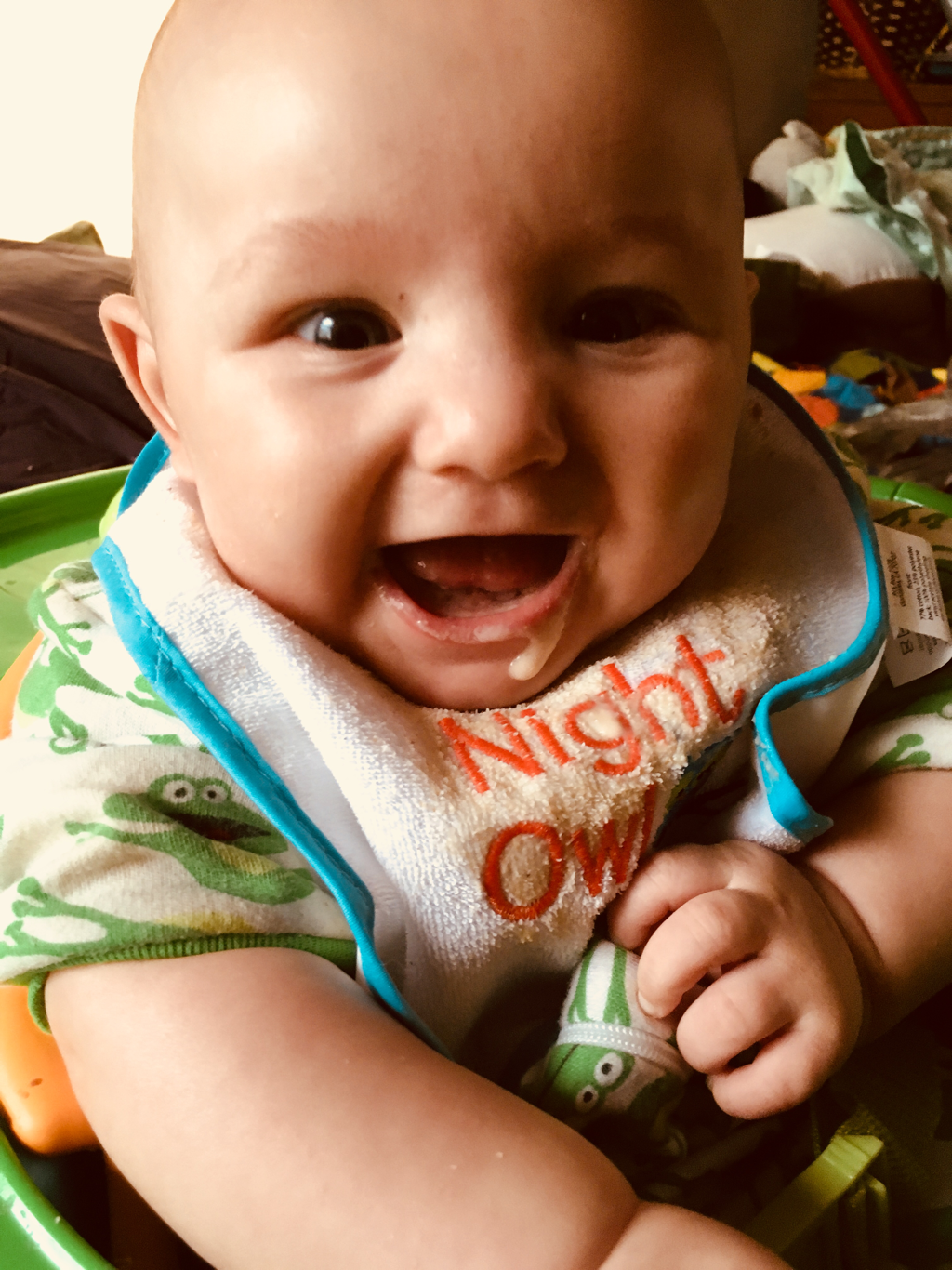 Christos is eating baby cereal now and weighs 16.3 pounds at his last doctor appointment. He’s very healthy and loves his cereal. He’s starting to teeth. He has a silcone type teether that he really likes. This was his first time eating the baby cereal. 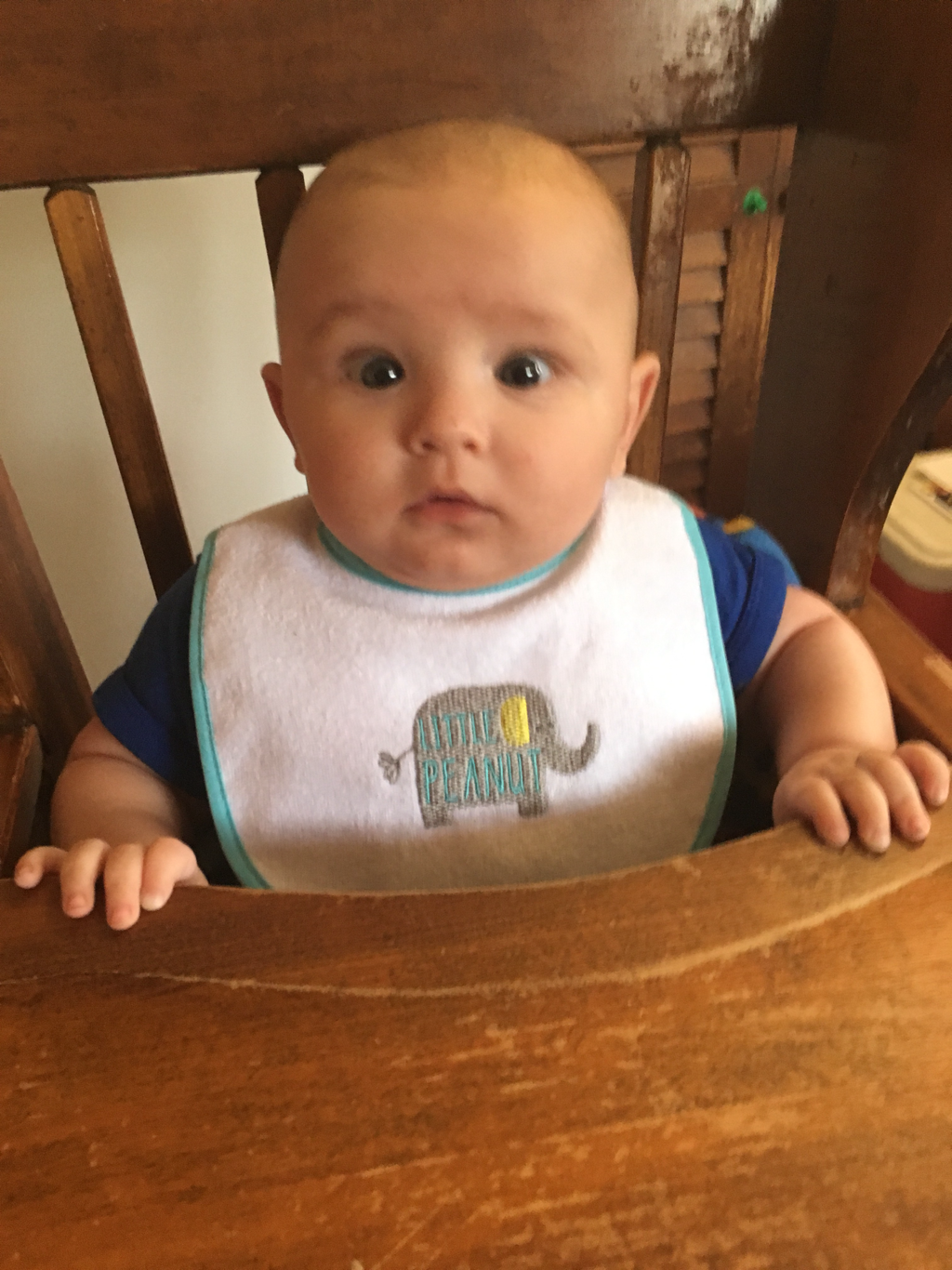 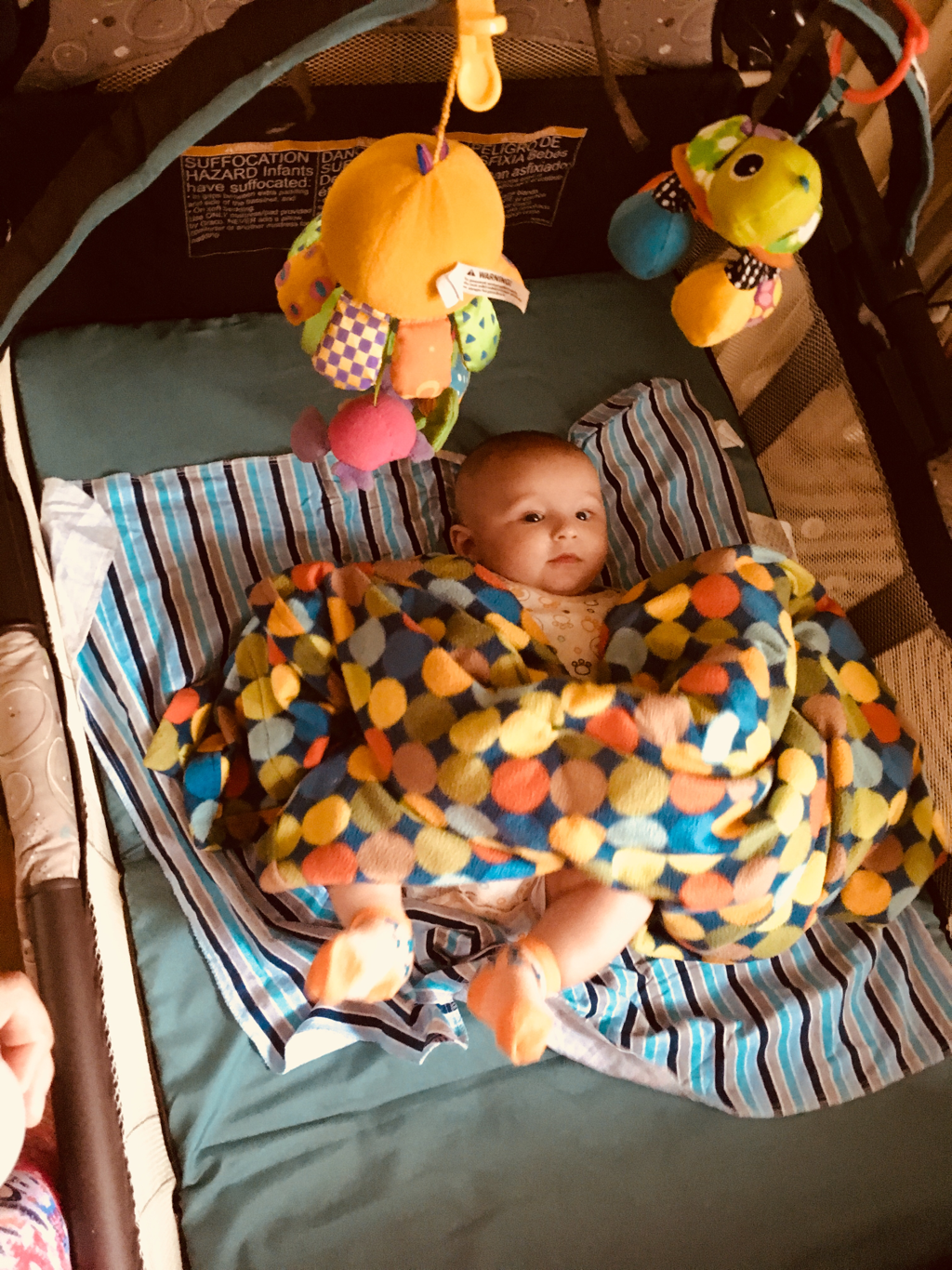 He’s too big for the bassinet now, so we have him in the pack and play in our room. Until I can figure out how to get his crib in here. He loves though and has room to play. He plays with his hanging toys and has a lot more room to move around. His turtle is still his favorite. The picture above was him checking his new bed put after we first set it up. 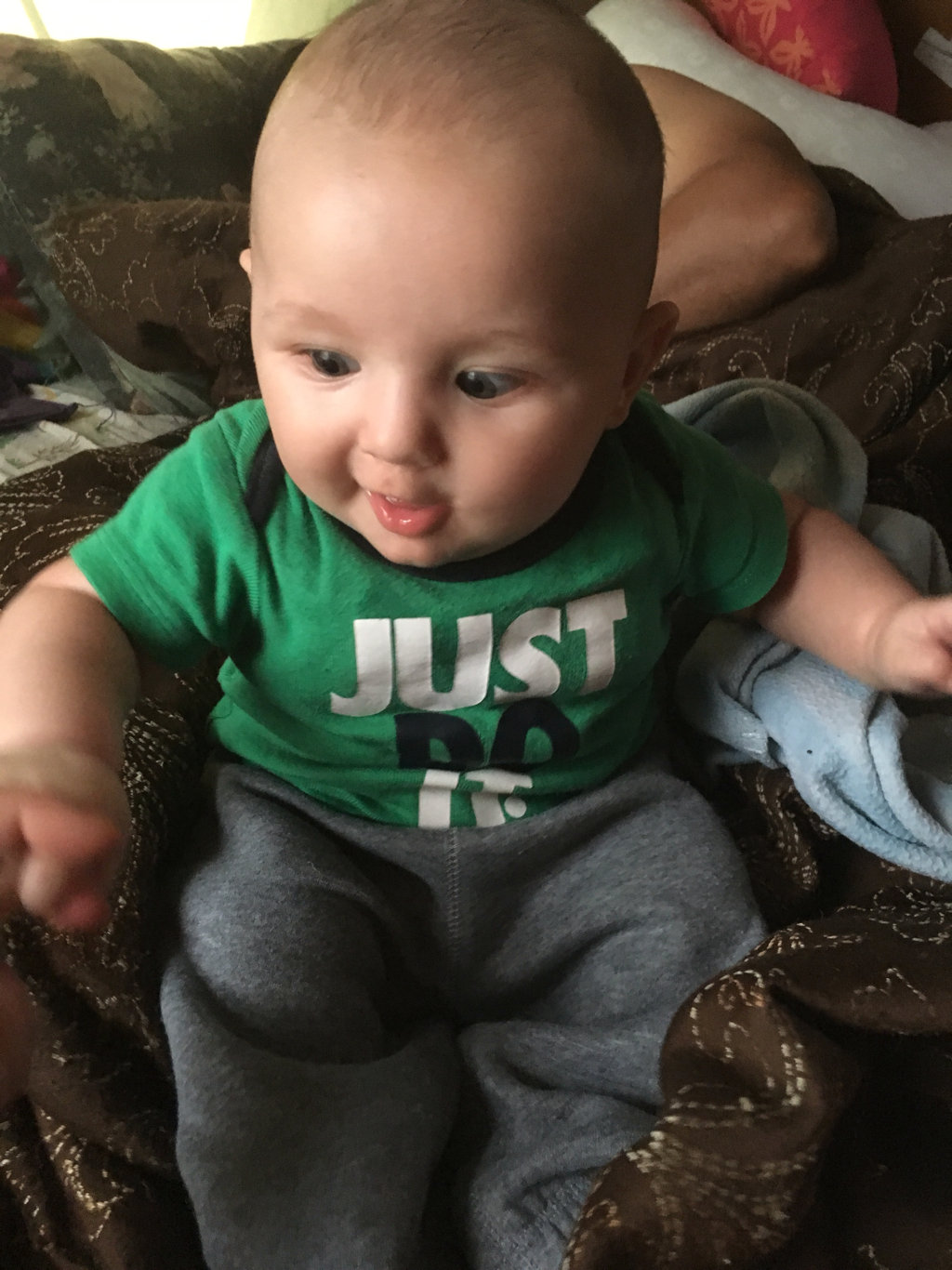 He does really good at sitting up. He can sit up on his own supported and by himself for a few moments. He gets really excited and laughs a lot. I love his laugh and he’s always happy. He isn’t a fan of being held by new people and is pretty picky when meeting someone new. He is starting to get better with letting other people besides myself and his dad hold him. 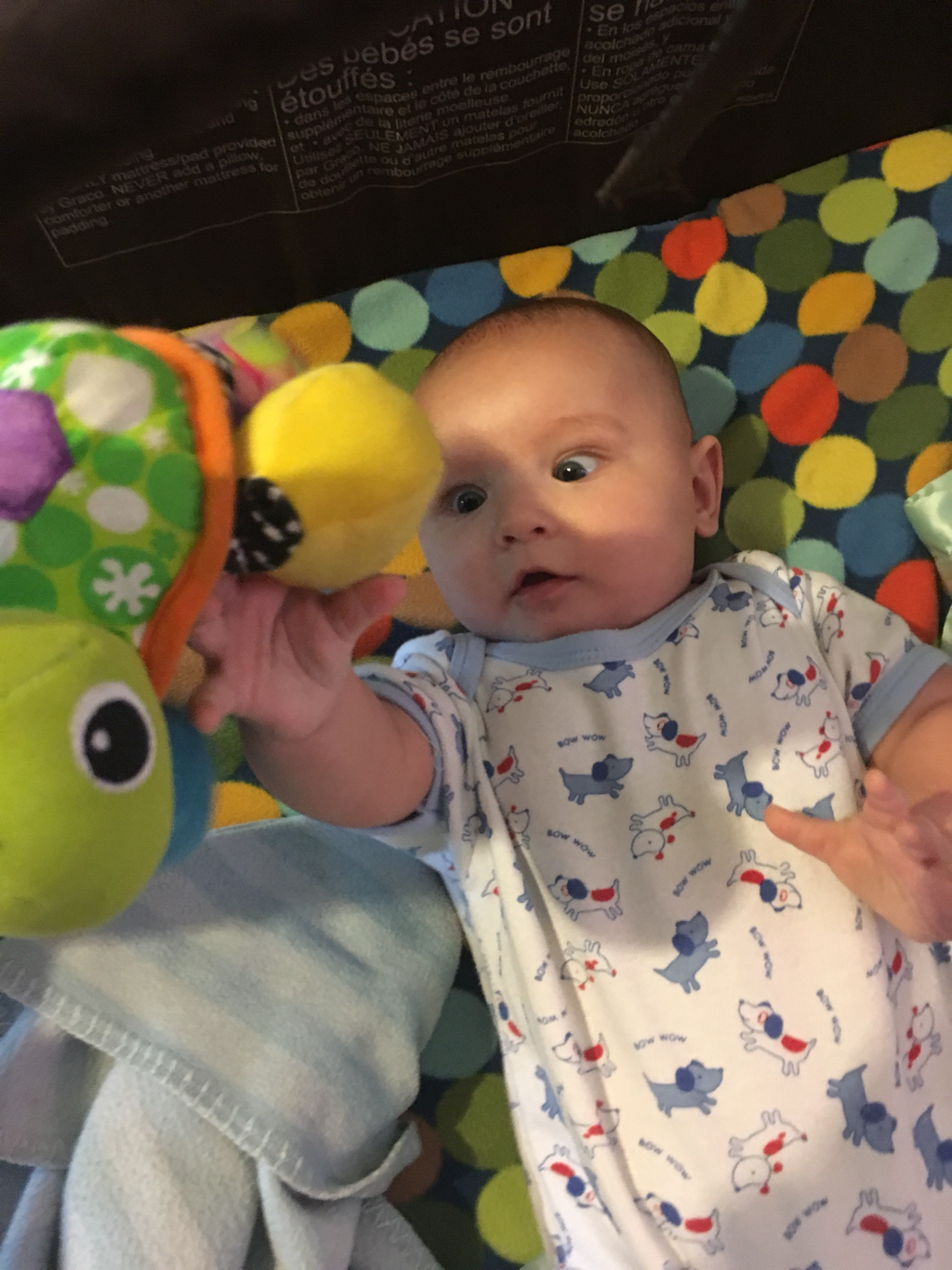 His turtle is his favorite toy. He doesn’t wake up crying in the morning. I know he’s awake because his turtle will start to rattle and he’s playing. He sleeps through the night now. He goes to sleep around 8:30 and wakes up around 4:30. He will play for a little bit. Then I change him, and feed him and then he’s back to sleep until 8am when it’s time to bring his sisters to the bus stop.

He loves his sisters 😊 One day Sophia walked out of the room after playing with him. He yelled at her to come back so I had her come back in as I was holding him. I let her know how much he loves her and wanted her to play with him.

Mya sings him sone kind of remix of the Humpty Dumpty song she learned at school. He loves watching her sing to him. Emma plays with him too. They are all really good with Christos and enjoy having him around. He gets really excited to see them after they’ve been in school all day. 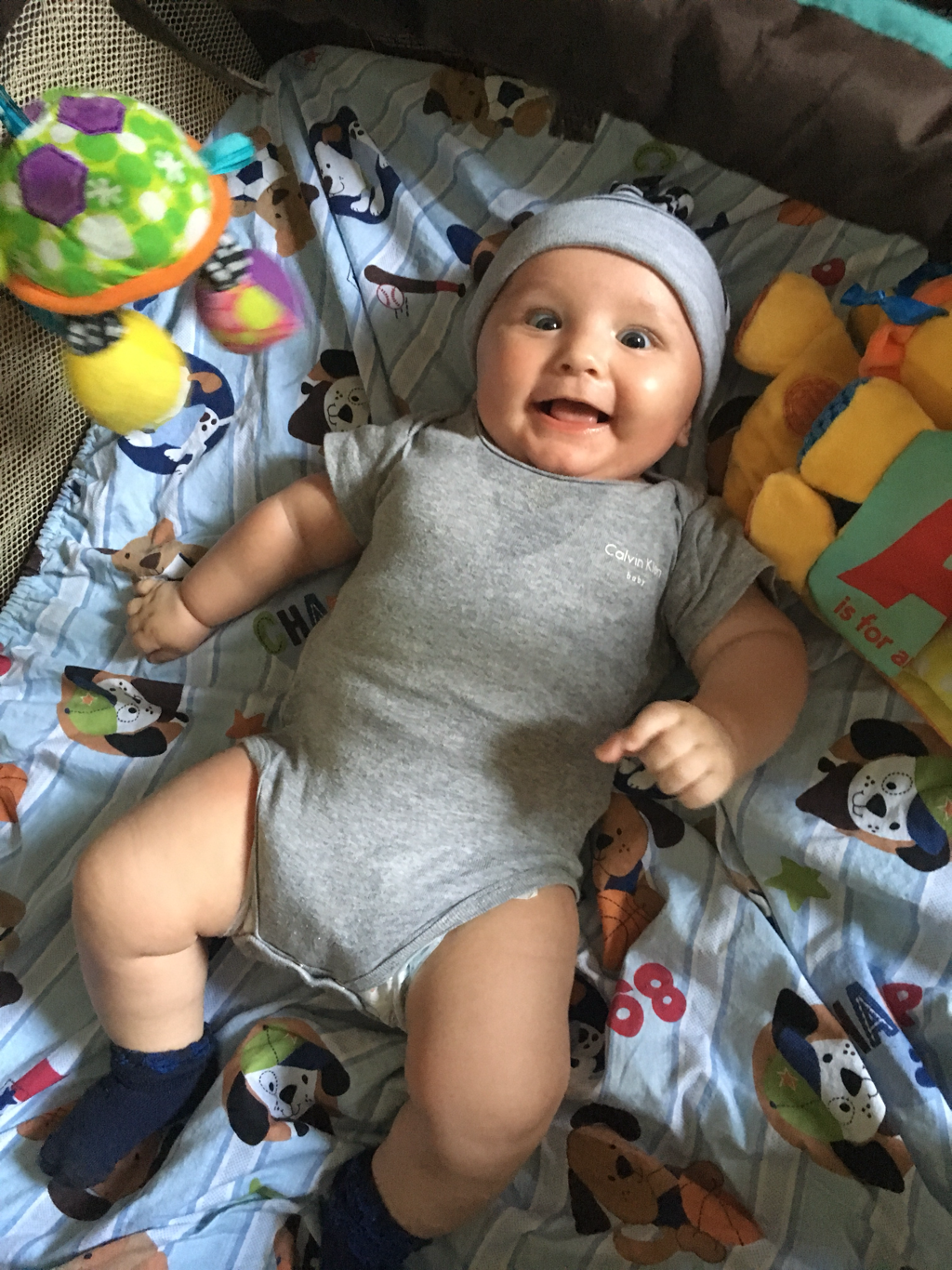 May 29, 2018 5 Months
Christos is a very happy, well tempered baby and he doesn’t get mad very often. He doesn’t cry a lot but loves to laugh and play with toys. He’s had a growth spurt and is getting taller. Both my husband and I are pretty short, but he seems to be picking up the height genetics from my parents. He says “da da” all day long especially when he is excited. He will clench his fists when he first sees daddy come home from work.

At at this point we have a pretty consistent routine. He comes with me in the morning to bring the girls to the bus stop. He’s usually ready for his morning nap when we get home. The girls didn’t start summer vacation until half way through June, so it was just me and him during the day until Sophia got off the van from Pre-K. Next year he will have me all to himself while his sisters are all in school full time.

Something Christos really enjoys is jumping. He likes to jump in his jumper and while I help him stand. He’s always trying to jump and laughs about it. 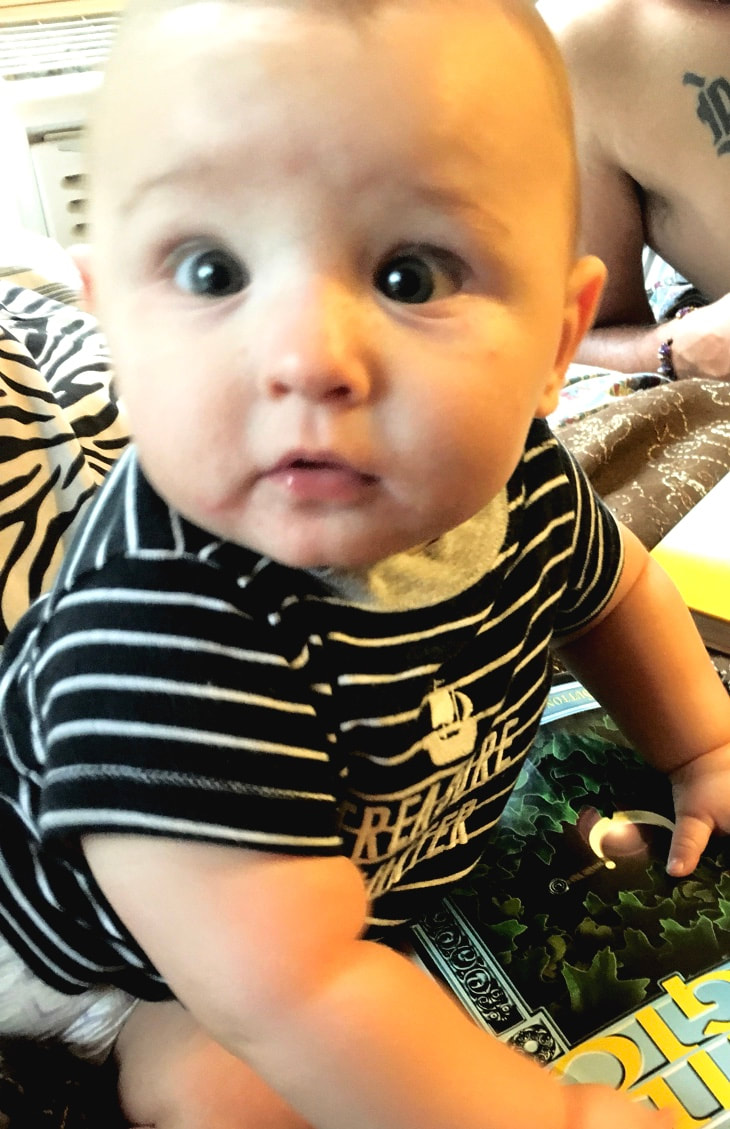 August 18, 2018 7 Months old
At this point, Christos was learning how to sit up all by himself. He mastered sitting himself up and maintaining balance. He could also scoot across the room. He started scooting by getting on his hands and knees and rocking back and forth.

We had fun a really fun summer, and kept pretty busy. I haven’t had a chance to update this blog as often as I would like to but I did take notes so that I could update accurately. We all went to a lake/park for a childhood friend of mines, child’s fifth birthday party. Christos got to swim for the first time and he absolutely loved it. He didn’t get fussy or cry the entire time we were there. He sat with us at the shoreline and splashed in the water. The cutsie floatation devices are not allowed at the public lakes. Children are only allowed to wear coast guard approved life vests. Which is what my other children have. He still had a lot of fun 💦 and loves being in the water just like his sisters.

From 6 months- 7 months Christos has been pulling himself up holding on to furniture, for short periods at a time. He also began crawling, and getting around on his own. He crawls much faster than he was scooting. He enjoys playing with the toys on his walker and practicing standing. He was determined to learn how to stand and began standing faster than I have seen any of my other children, or other children in my years as a childcare assistant.

He says momma now, but mostly when he really wants something. He says da da when he’s happy playing, but when he starts to get fussy he yells momma. He babbles a lot more now then he used too, but he’s been doing the baby talk for a while now. I am amazed by how fast he is growing and learning. He’s excelling in his percentiles at the doctors office. 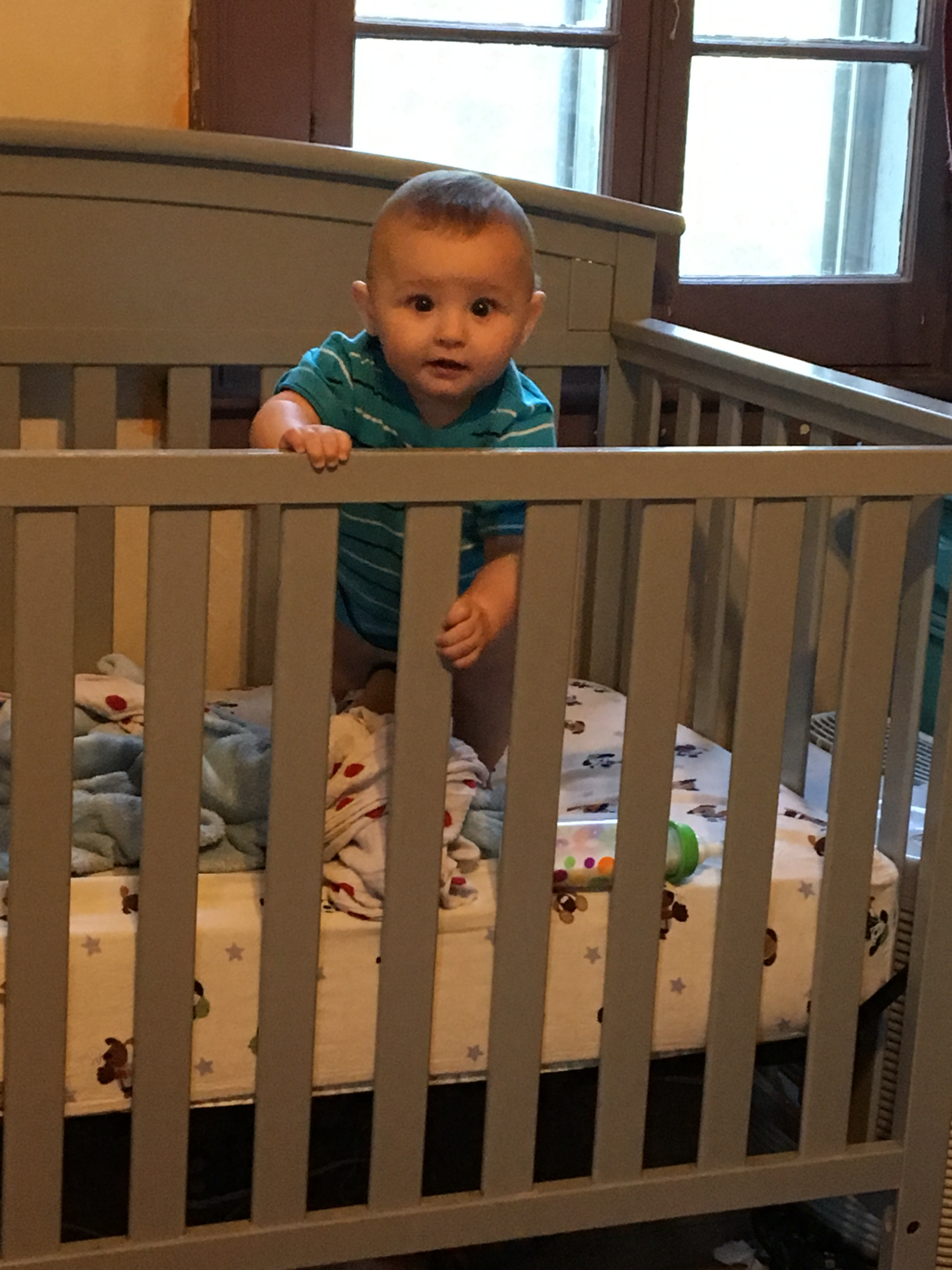 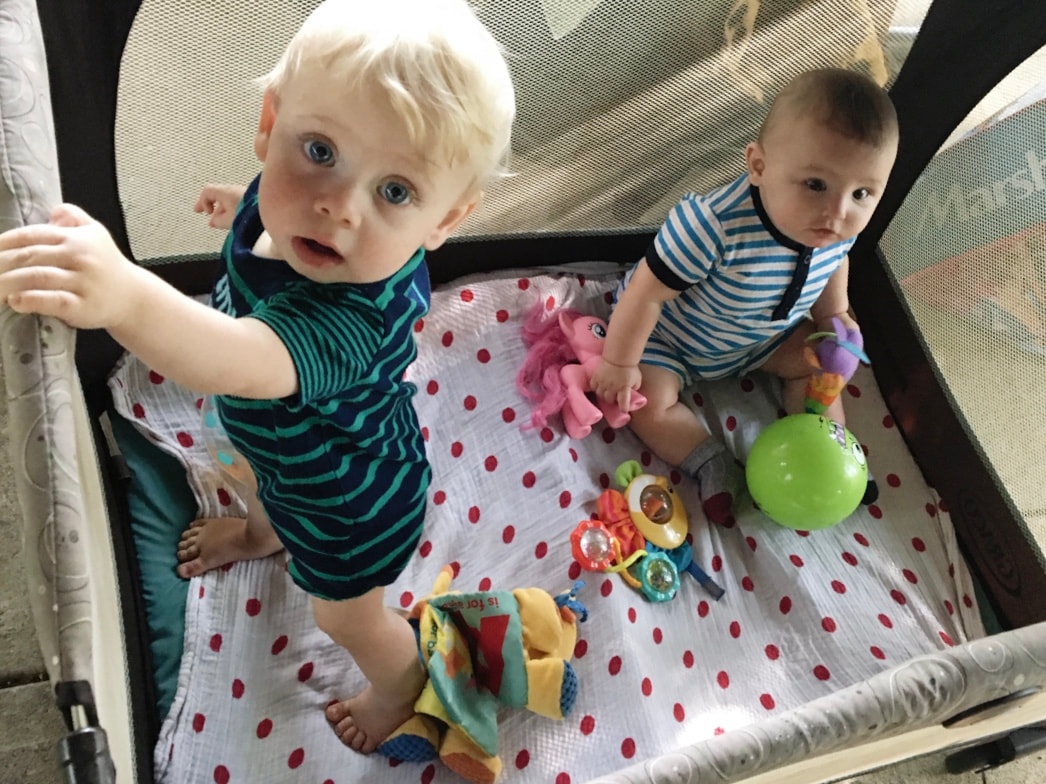 August 15, 2018
This picture was at my neighbor’s daughters birthday party. Christos is in the pack and play with his friend. My neighbors son is 3 months older than Christos and they have seen each other many times and usually just look at each other and talk to each other while they are in their strollers at the bus stop. Here they played together very well, and were very interested in each other. They did so well together in the same pack and play. We were very surprised. Christos was about the same size as his friend in the picture. His friend was a little taller but they weighed the about the same.

At Christos doctors appointment he weighed in at 20.3 pounds for his 8 month appointment. He reached the 80th percentile. The doctor is very happy with how he is developing and he is thriving. 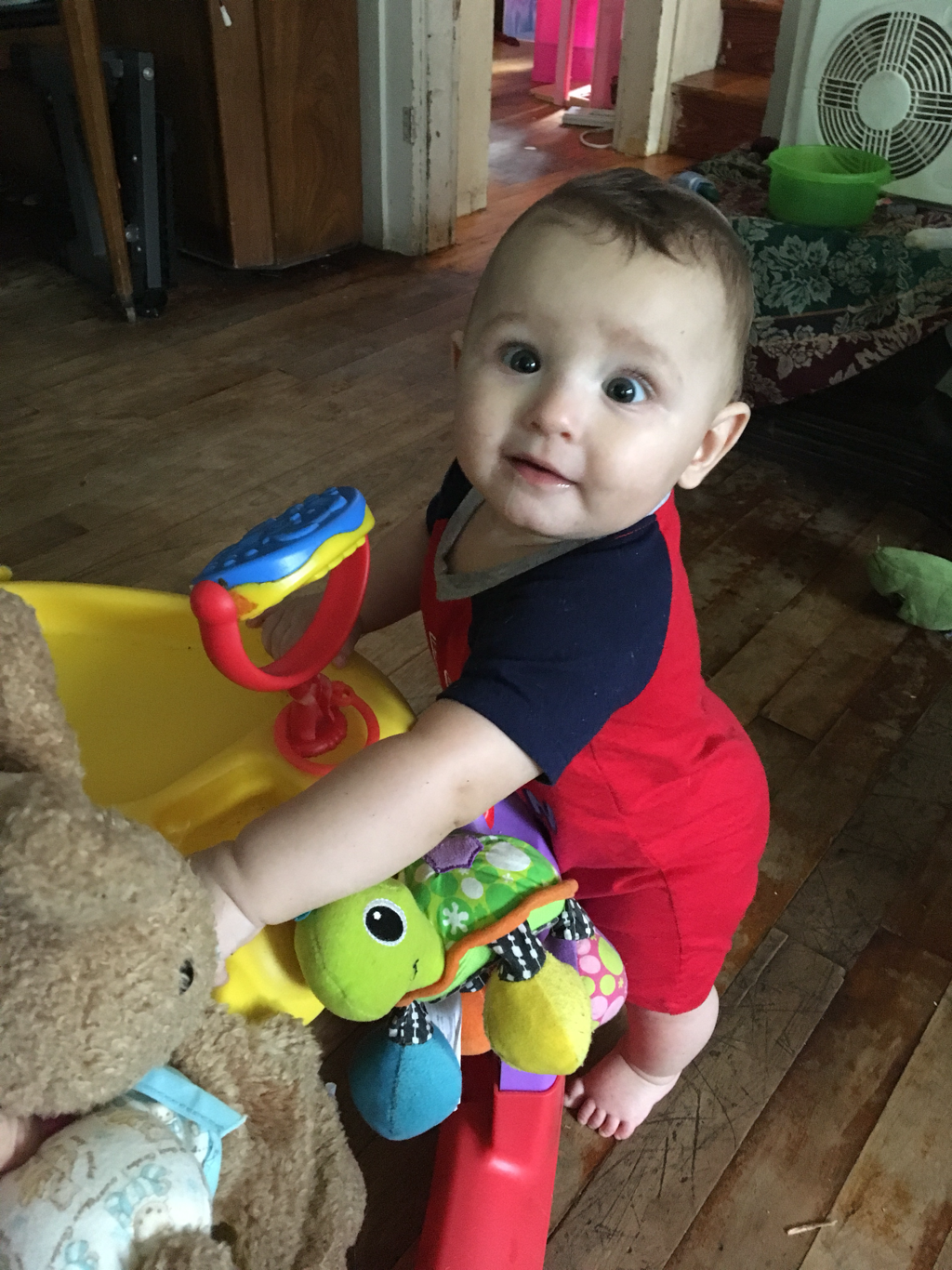 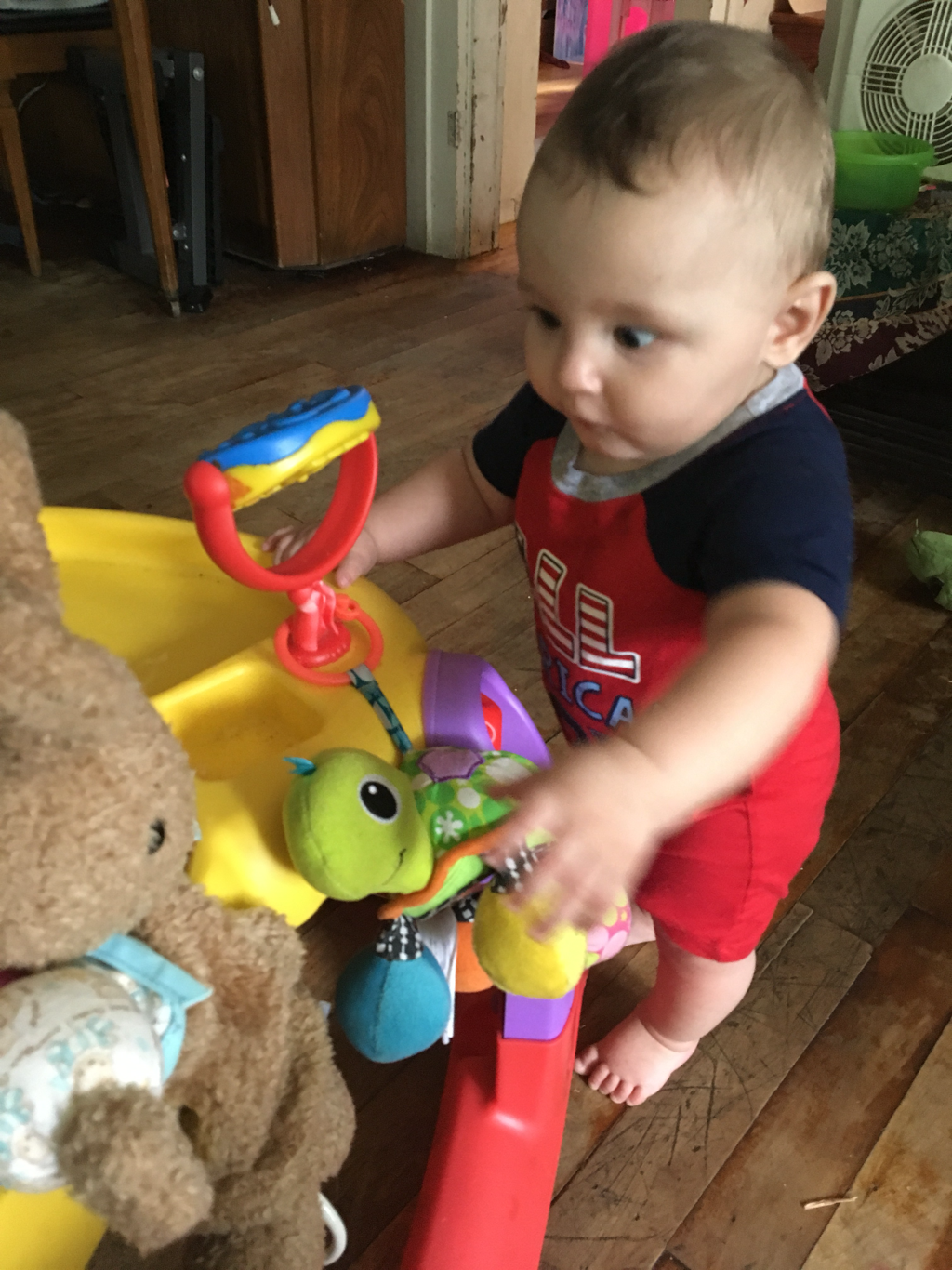 August 28, 2018 Christos pulled himself up with his walker. While he’s in his walker he can move forward and mostly backwards. He is beginning to want to be in his walker less and less. Christos prefers to be a “Free Range” baby we call him. He is playing with a bigger variety of toys.

We also got a swimming pool for the yard, so he’s been enjoying playing in the pool. He absolutely loves the water 💧 He enjoys swimming and splashing. It makes him very happy. 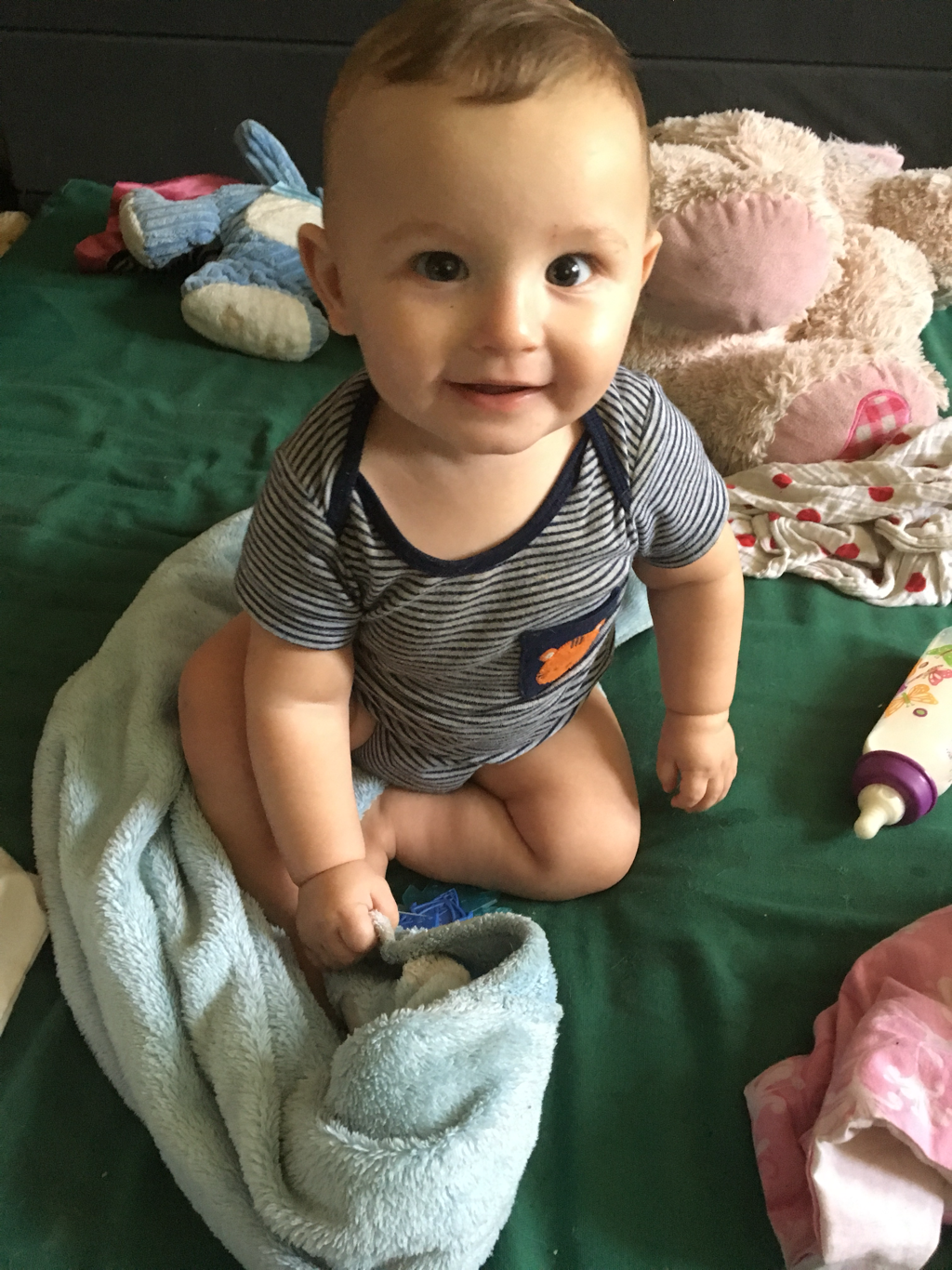 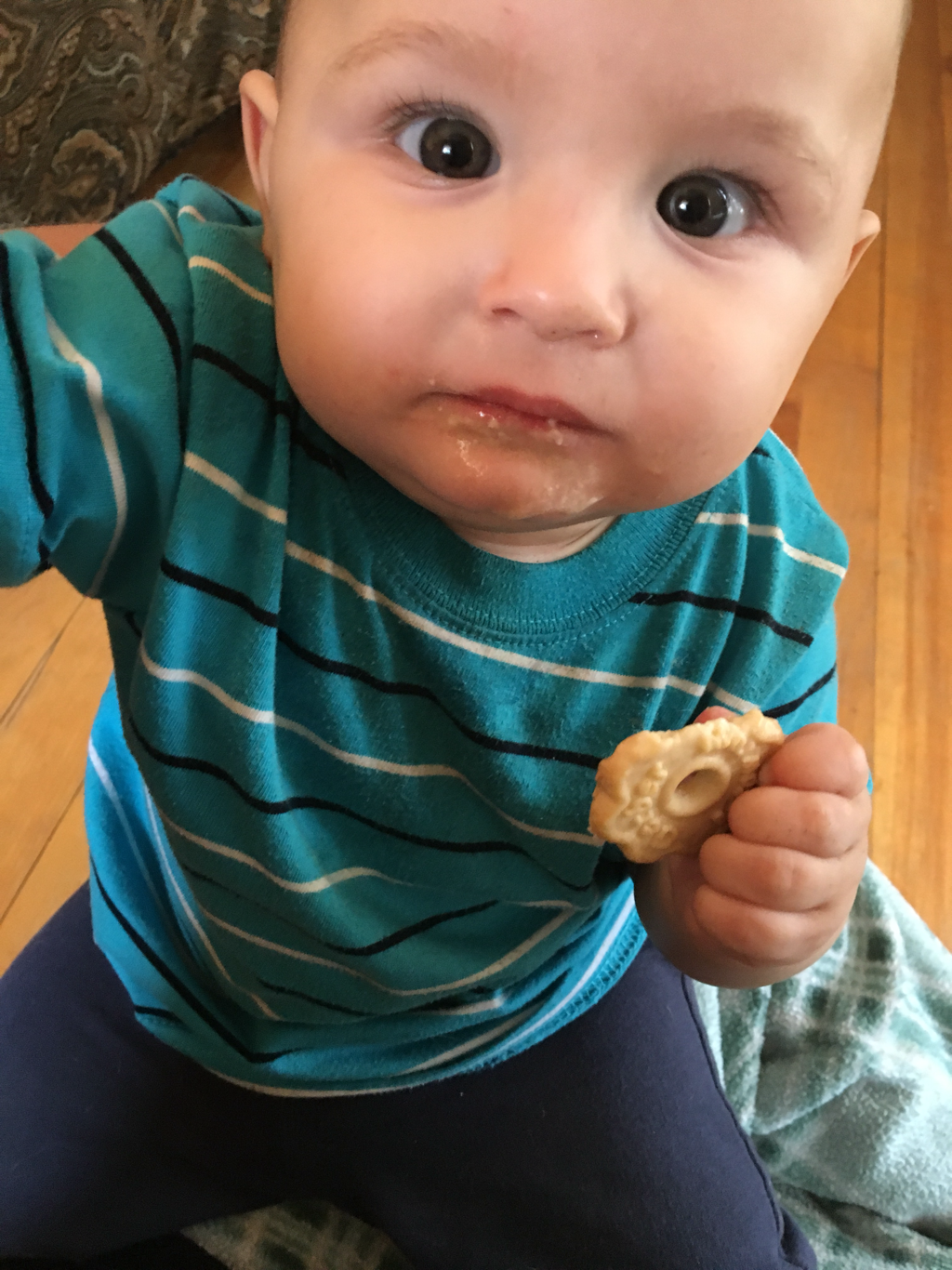 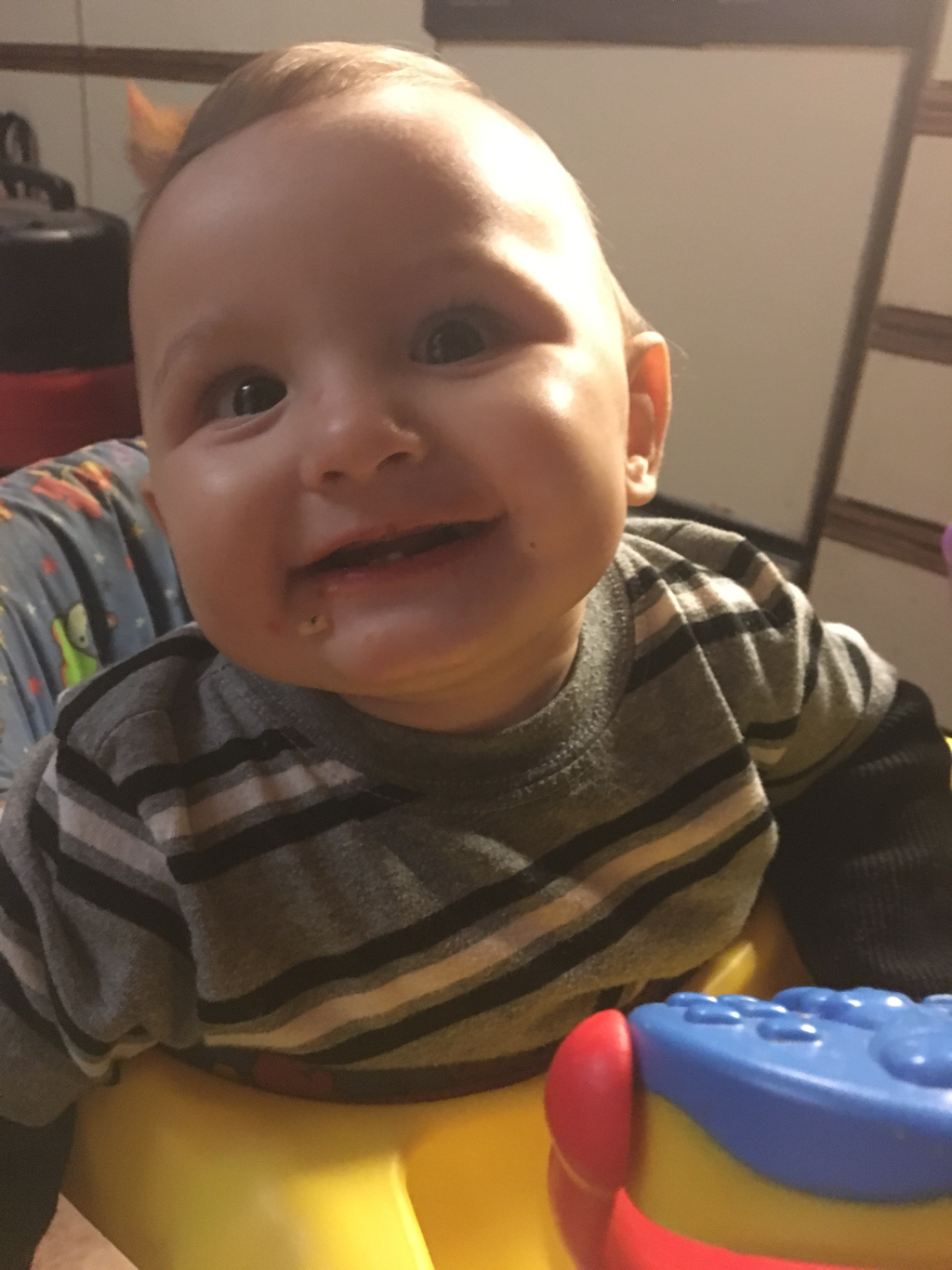 September 23, 2018 First time eating spaghetti 🍝
He loves it! Christos has smelled spaghetti cooking many times in the house, so now that he has his two bottom teeth and is starting to eat solid foods, we decided to see if he would like it. My husband cooks the spaghetti in the house and all the kids love it. It’s a very special family dinner in our home.
Powered by